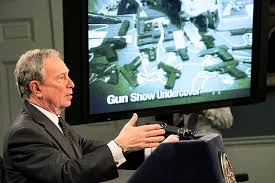 American Thinker – by William A. Levinson

The New York Daily News lauded the effectiveness of Mayor Michael Bloomberg’s sting operation in which his office hired private investigators to buy guns without background checks at gun shows. The article omits, however, a warning from the U.S. Justice Department that Mayor “Kim Jong” Bloomberg’s anti-Second Amendment vigilantism has strayed into a legal gray area, the black side of which is a felony (straw firearm purchases). It is important to circulate this letter as widely as possible, noting that at least one mayor resigned from Bloomberg’s Mayors Against Illegal Guns when he found out about it. I am sending copies of both letters to the mayor of Wilkes-Barre, Thomas Leighton.

Mayors Against Illegal Guns is the same organization that is now running advertisements, apparently using Mr. Bloomberg’s money, to attack the Second Amendment. It is also the organization of which more than 1 percent of whose members (10 out of 800) have been convicted of, or are under indictment for, crimes such as Gary Becker’s (Racine WI) attempted second-degree sexual assault of a child. James Schiliro, the mayor of Marcus Hook PA, was recently charged with reckless endangerment that involved the discharge of a firearm. It therefore comes as little surprise that New York’s mini-dictator strayed into a gray legal area that, had he strayed somewhat further, might have exposed not only him but also those acting under his direction to serious criminal charges. For the record, however, a Federal judge ruled that Bloomberg did not actually cross the line that would have made his actions a crime.

Here is the text of the letter, which Michael A. Battle addressed to Mayor Bloomberg’s Criminal Justice Coordinator, John Feinblatt, on February 6, 2007. The third paragraph is particularly important, and it warns the City of New York against taking Federal law into its own hands. Note particularly the phrase, “misrepresent that they are the actual purchases of the firearms when, in fact, the purchases are being made on behalf of another person or entity (for instance, on behalf of [New York] City).” It sounds like the DOJ is referring to straw firearm purchases.

This letter is to follow up to the recent activities conducted by the City of New York with respect to 15 federally-licensed firearms dealers against which the City filed a civil lawsuit on May 15, 2006. As the Director of the Executive Office for United States Attorneys, I am writing to you on behalf of each United States Attorney in whose district the City of New York’s contracted investigators took action.

As I communicated to you in May of 2006, the evaluation and investigation of this matter is within the jurisdiction of the Bureau of Alcohol, Tobacco, Firearms, and Explosives (ATF). Accordingly, the materials your office provided to ATF’s New York Field Division were referred to the appropriate ATF field offices for evaluation. Recently, the ATF field offices concluded their evaluation and investigation, and consulted with their respective United States Attorney’s Office. The United States Attorneys’ offices in each district wherein the City of New York conducted activities have carefully reviewed the matters and considered all the materials. Each United States Attorney’s Office has concluded that the circumstances surrounding the purchases do not rise to a level that would support a criminal prosecution.

Although a decision has been made not to move forward with case filings in these matters, you should be aware that there are potential legal liabilities that may attach when persons outside of law enforcement undertake actions typically reserved for law enforcement agents. This risk is particularly acute when such persons, however well-intentioned, but without proper law enforcement authority, misrepresent that they are the actual purchases of the firearms when, in fact, the purchases are being made on behalf of another person or entity (for instance, on behalf of the City). In addition, civilian efforts can unintentionally interrupt or jeopardize ongoing criminal investigations.

We appreciate your interest in this matter. Please do not hesitate to contact the Department of Justice if we can be of assistance in other matters.

The U.S. Justice Department is apparently not the only law enforcement agency that had a serious problem with the Little Dictator’s activities.

Convinced that illegal gun sales in Virginia contribute to violent crime in New York, Bloomberg has been arming private investigators with hidden cameras and sending them into Virginia gun stores to try to make illegal buys. The process involves “straw purchases,” in which one person legally fills out a form and buys a gun for someone else.

…[Virginia Attorney General Robert] McDonnell has sent Bloomberg a letter warning him that he and his agents could be charged with a felony if they conduct further stings without the help of Virginia or federal law enforcement officials.

From where we sit, Kim Jong Bloomberg is a wannabee dictator if not like his North Korean counterpart, at least on the same continuum: one who thinks his billions of dollars entitle him to lord it over not only the serfs in his manor (New York City), but the rest of the country. We must make sure that every member of Mayors Against Illegal Guns, as well as the voting public, knows that the Justice Department and at least one state’s Attorney General denounced in the harshest terms this individual’s efforts to take Federal law into his own hands.

William A. Levinson, P.E. is the author of several books on business management including content on organizational psychology, as well as manufacturing productivity and quality.