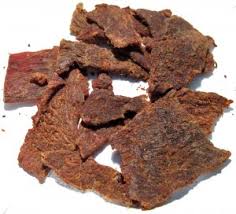 Invented by the natives of North America, pemmican is the original MRE.

Pemmican was used by indian scouts as well as early western explorers as an instant, ready-to-eat, high-energy food. It was light, compact and high in protein, good carbohydrates, and sustaining fats.

Given the incredible amount of concentrated nutrients and calories, pemmican would be a fantastic addition to any bug-out bag

During my college years, my friend and I would use this (in addition to any wild edibles we found) as a primary trail food when doing extended “survival trips” during our southern-Utah explorations.

As an embarrassing side note, most of those times were spent barefoot while wearing only loin cloths (yeah, I know…we were indian wannabes at the time). In one way it was a good thing because it forced us to pay attention. We sure as heck made sure we saw anyone who we came across first before they saw us. This gave us time to fade into the bush and let them pass by.

So anyways, back to pemmican…

Based on personal experience, pemmican is very sustaining and I found it far superior to any MRE or other trail food out there. It not only provides a lot of energy in a small package, it will also keep for many years.

In this article, I’ll be showing you how you can make your own pemmican

How to make pemmican

Pemmican is a combination of rendered animal fat, pulverized dehydrated meats, and if desired some dried fruits. Here’s the process:

STEP 1: DEHYDRATE THE MEAT AND BERRIES

In the photo above I used my home dehydrator. In college, since I didn’t have one, we would simply sandwich the meat and berries between two window screens and set them out in the sun to dry for a day or two. It was just as effective.

For the fat portion of pemmican, you can use tallow (rendered beef or mutton fat) or lard (rendered pork fat). There are multiple methods of rendering your fat. Here’s the three most common (with my favorite being the Crockpot method) (I’ll be rendering beef fat in this example):

Method 1: How to render fat in a Crockpot

Method 2: How to render fat on the stovetop

Method 3: How to Render fat in the oven

After dehydrating the berries and meat and rendering the fat you’ll be left with the following:

Before you can combine the ingredients though, you’ll need to shred the berries and the meat. In the old days they’d pound it with a rock to turn it into a “powder”. In our days a blender is a lot easier:

Blending the meat and berries:

Now look at the ingredients:

After you’ve dried/shredded your meat and fruit and rendered your fat, simply combine the ingredients as follow:

You’ll know when it is saturated enough when you can easily form a ball and it doesn’t crumble apart:

Some final comments if you don’t like all the fat

If you dislike the idea of using animal fat as a binder you can replace it with honey instead. It will keep for a long, long time just as normal pemmican will.

Just keep adding honey to the dried, shredded meat and berries until it binds enough to form it into a ball shape.

Although this option is a lot more tasty, personally I don’t like the sugar rush (and resulting crash) I get when eating this while out in the bush or on the trail. Using fat as a binder seems to provide a lot more stable of an energy throughout the day.

One thought on “Pemmican: The Original MRE”