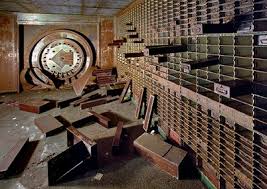 Armed terrorists descended on Ft. Knox earlier this afternoon and got away with the US gold reserves, as Germany and Texas cried foul.  Apparently a bunch of that gold in Ft. Knox was theirs.

White House Press Secretary Jay Carney spoke on the theft at a White House news briefing.  Carney said, “The Germans and the goddamn Texans will just have to get their money back from the terrorists who stole it.”

He then identified the culprits as being fifteen white supremacists who were speaking Iranian and wearing North Korean combat uniforms.

Update: Obama announces a no-fly zone over Syria and Kentucky.  I know what you are asking.  Why Syria?  Well, why Iraq?

Update: CIA Director, John Brennan, orders assassinations by drone to be carried out in Ohio in retaliation for Amish support of terrorism by wearing beards.

Update: Ben Bernanke denies that recovered bars are not gold but rather tungsten bars painted with that cheap yellow paint you get at Wal-Mart.

18 thoughts on “US Gold Reserves Stolen from Ft. Knox”