Draconian Obamacare Must be Rejected Outright 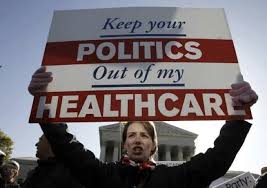 It is the third anniversary of Obamacare, and as promised by Nancy Pelosi, we are finding out what is in it…the hard way.  We have seen the largest tax increase upon the middle class and working poor since the communist Roosevelt’s New Deal.  Health care costs are sky rocketing as coverage is disintegrating before our very eyes.

Seems pretty cut and dry, nonetheless, the Supreme Court violated the Constitution in one area under the guise of enforcing it in another…a total sham.

We are now seeing what we in the know have always expected and that is the Obamacare legislation, written by the insurance industry, is making that industry just like the Federal Reserve, private corporations with their own government enforcement arms provided by the taxpayer via the IRS.

In short, the most diabolical industry next to banking, the insurance companies, can now confiscate our private property, and force us to by a product from them of which they can deconstruct at will to make it absolutely useless to the American national being forced to buy it.

The only ones benefiting in any way from this legislation are the illegal insurgents coming across our southern border.  As we are all now to be considered equal wards of the government, we can expect to see the illegals receiving better health care than the American nationals, as they represent contented slave laborers who serve a purpose, which is the displacement and dispossession of American nationals.

Once again, we are paying at gunpoint to finance our own demise.  We should reject the socialist Obamacare and the violations of our rights it represents with the same vigor that we are rejecting gun confiscation and legalization of the southern insurgent forces. It is time to stand in absolute defiance to all acts of tyranny through infringement, both past and present.

2 thoughts on “Draconian Obamacare Must be Rejected Outright”