Lockdown in Boston: Food for thought 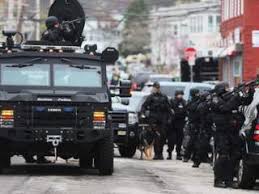 It occurred to me that what the American people witnessed in Boston, with the show of force and the new phrase “Lockdown”.  It got me to thinking… If the authorities told everyone that it was these two guys, then the officers, TSA, FBI, paramilitary, etc. truly believed it, right?  So, the Governor, the Mayor, and all involved began a total take-over of two towns.

The media, who is always more than happy to oblige to serve this agenda-driven takeover of America, will lambast the videos of the ghost towns, train stations, and whatever else they could show so the people of this country would be in awe of the spectacular show of force and firepower to make us all quake in our shoes.

If the media shows this constant barrage of news, enforcers and ghost towns, then the American people feel helpless and willing to submit to such powers, right?  Well, I say wrong!  Why?  First off, WE are not criminals no matter what the media portrays of us.  WE do not blow things up and kill innocent people.  WE (most of the time) defend what the enforcers of law do to track down true criminals.  So, if we did nothing wrong and our Government decides that we are a bunch of law abiding Christian gun-lovers and want us removed so they can continue their communistic takeover of this country; will the enforcers feel they are truly going after criminals, securing our safety, and feel justified in doing so?  I think not!

All that we have seen is a big bully who is flexing his muscles, but deep down they are still the same 98 pound weakling that has to puff-up and speak loud to intimidate the others around them to create power and fear.  Are you afraid? Are the millions, upon millions, upon millions of Americans afraid?
These same Americans that own over 300,000,000 (known) guns.  Are the cave-dwellers in Afghanistan, that are way out numbered by our own military, afraid?  Remember now, we’re still over there fighting.  Is China, Russia, or any other country for that matter, afraid to attack us?  I’m sure you all know the answers to these questions.

So, you tell me.  If you cannot pass gun control laws in our own federal Government and over four hundred Sheriffs stand by the Constitution, what would you do?… flex your muscles and speak loud to scare others into thinking your a bad-ass?  Sure you would, because “they” know, and you know that “they” don’t stand a chance.

Sure, a few enforcers may fall in line but the rest won’t.  Why? Are they married?, do they have kids?, do they have friends?, of course they do.  Are they willing to sacrifice all this for some puffed-up loud speaking, muscle flexing communist?  Hell no; they’re not!

Which leads me to my conclusion.
We know that we over power them, it’s as clear as crystal. So if China, Russia and our own Government knows this, then what other recourse is there?  Bingo!  Economic meltdown.  This way, you kill two birds with one stone.  If the American people fall prey to this, imagine if you will, the catastrophic consequences.  If families are devastated enough, then they will submit to any demand placed upon them, including turning over guns just to feed their families, and like my oldest brother says, “We are in a depression and the only reason the American people can’t see it, is because the bread lines are Government controlled” (i.e. Government funded EBT debit cards).

So, what do you do? First and foremost, WAKE UP out of your stupor and smack yourself to confirm you are not dreaming.  Invest in things that have intrinsic value, such as metals, bullets, guns, liqueur, cigarettes, food that you can store, water (lots of water), learn how to garden, learn how to make things from scratch – any and everything that is valuable to you or someone else, and for God’s sake, get to know your neighbors better.  Remember, if we come together in a time of crisis when “They” want us divided, “They” Lose!  Their house of cards will collapse, not ours.

One final thought.
Turn off the propagandized media channels (and for those of you that say my news station isn’t like that, well then, I picked the winning power-ball numbers just for you – trust me, I swear), pick up a book and educate yourself, take an honest look around you when your out and about, are things getting better?  Don’t ask me; I have a job so I’m only in a recession, not a DEPRESSION.

Remember that individual who came around shaking your hand and patting you on the back pretending to be your friend at all those town hall meetings? (I think they call them politicians. I call them crooks).  You know, the ones who said, “If it wasn’t for people like you voting for people like me to get in there and change the Government for the better, because I will be your voice… blah blah blah”.  I double-dare you to call them up, email them, or try to visit their office(s) to see or talk with them.  Go on, I’ll wait;  I’ll just sit here and read “War & Peace” cover to cover.  I think you get my point!
Don’t worry though, you’ll see them next time when they’re up for re-election so we can repeat the hand shaking and back patting all over again while they tell you “Good to see you again, thanks for coming out” while they abruptly excuse themselves to go and handle some things with their staffers.  How do I know this you ask?!  Because I shook hands with plenty of them and listened to their cockamamie BS.  I even offered one congressman my services for free to go through the bills introduced in congress to help point out dangerous legislation that would not benefit the American people – FREE darn it!  I guess discovering the truth in legislation is frowned upon in Government; go figure! Oh, don’t worry congressman, constituents scorned NEVER forget, not anymore.

Realize this, you can believe all you want in Santa Claus; just tell me one thing, how are your kids ever going to get any presents?

You have my permission to forward this on – I encourage it!

6 thoughts on “Lockdown in Boston: Food for thought”