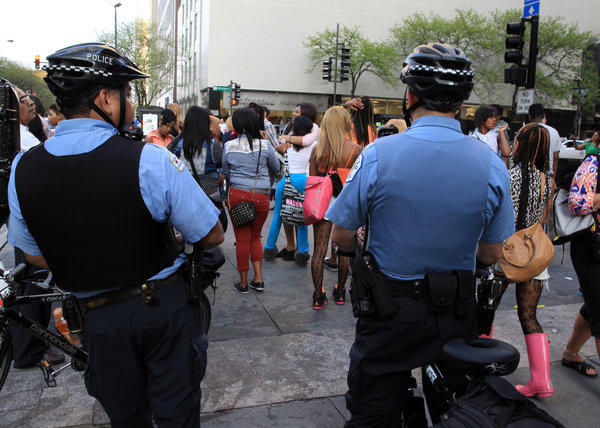 Eleven juveniles and one adult were arrested last night after a large group converged near the Gold Coast and were blocking traffic, police said.

The youths were part of a group that had caused a “minor disturbance” in the area, Ursitti said. She said the group members were not being violent and there were no reported injuries.

The group was made up of several dozen members who roamed from Michigan Avenue west on Chicago Avenue to LaSalle Street and witnesses said they were between the ages of 14 and 19 years old.

Paula Bishop, 49, who was visiting from Michigan to attend her son’s graduation from the Moody Bible Institute said at about 7:45 p.m. saw the group walking by.

“They were cursing, being obnoxious,” said Bishop.

A heavy police presence flooded the area on bicycles and on foot. Ursitti could not say how many police officers were dispatched to the area.

When police arrived, members of the group began to disperse, Bishop said.

Her son, Jake Bishop, 22, said he saw members of the group running in a circle on LaSalle Street blocking traffic. When the police arrived the group members dispersed.

“They all converged on LaSalle,” said Jake Bishop.

Police were trying to get the group members to leave the area and were ushering members of the group onto the Red Line subway trains.

A police officer told the group, “Chicago is closed. Time to go home.”