Russia and China secure their energy future without the United States 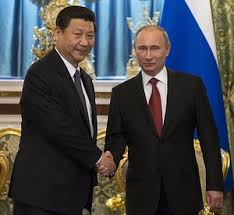 The Real Agenda – by Luis Miranda

Russian President Vladimir Putin urged his colleague, the President of China, Xi Jinping to concentrate on the development of trade and economic relations between the two countries.

On Friday, in the Kremlin, both leaders signed a joint declaration to deepen bilateral ties and attended the signing of more than thirty agreements and documents that particularly affect the energy sector.

For Xi Jinping, the trip to Moscow was the first international travel since his appointment as president and also the first leg of a tour that will take him to Tanzania, South Africa and the Republic of Congo.

In the South African city of Durban on 26 and 27 March, China will bring together the leaders of the BRICS (Brazil, Russia, India, and South Africa) and there the two leaders will meet again to continue discussing their current and future alliance, especially the details of agreements that have to do with energy resources.

The agreements signed between Russian energy companies and Chinese companies set more or less advanced stages in the development of joint projects with a history of long and arduous negotiations.

For example, Gazprom intends to begin supplying Russian gas to China in 2018 at the rate of a volume of 38,000 cubic meters per year, which can be increased to 60,000 million cubic meters, for a pipeline that is yet to be built. The head of the Board of Directors of Gazprom, Alexei Miller, said China could make an advance payment against future gas supplies.

The contract, scheduled for a period of 30 years, still has some details that need to be touched up. For example, the fuel price formula. The Chinese do not accept linking gas prices to oil made by the Russians and propose another model of calculation which results in lower prices.

Miller estimated the contract to supply gas to China will be signed later this year, after concluding a legal document in the summer. China is the world’s largest consumer of energy and Russia one of the world leaders in production. As one of the largest producers, Russia has been  affected by the crisis in the European Union, its biggest customer.

The lack of a developed transport infrastructure in the eastern part of the country does not allow the Kremlin to quickly diversify its energy market. The president of Rosneft, Igor Sechin, who just closed in London the international oil absorption TNK-BP, proposed to increase the supply of crude oil to China from 800,000 tonnes to 31 million tonnes. The China Development Bank will give Rosneft a credit line of $ 2000 million for the period of 25 years.