Watch Where You Point That ‘Scope: Police Mistake Telescope for a Gun

One more thing amateur astronomers might need to worry about besides clouds, bugs, and trying to fix equipment malfunctions in the dark – and this one’s a little more serious.

Earlier this week, two students at North Dakota State University (NDSU) in Fargo, North Dakota were setting up a telescope and camera system to take pictures of the Moon when armed police approached them. The police officers had mistaken the telescope for a rifle. 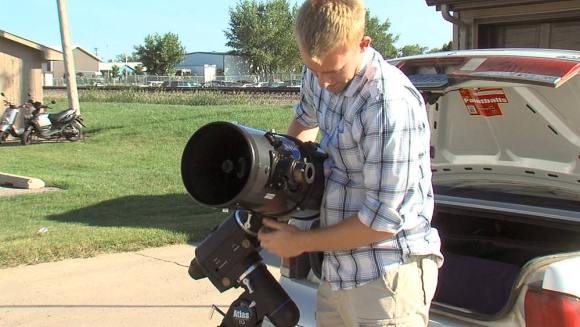 Students Levi Joraanstad and Colin Waldera told WDAY TV in Fargo that they were were setting up their telescope behind their apartment’s garage when they were blinded by a bright light and told to stop moving.

Initially, they thought it was a joke, that fellow students were pulling a prank, and because police were shining a bright light at them, the two students were blinded.

Police said that an officer patrolling the area had seen what he thought was suspicious activity behind the garage, thinking that one of the students’ dark sweater with white lettering on the back looked like a tactical vest, and that the telescope might be a rifle.

Police added that their response was a “better safe than sorry” approach, and they said the two students were never in any danger of being shot.

However, Joraanstad and Waldera said since they thought it was a joke, they initially ignored the order to stop moving and kept digging in their bags for equipment.

“I was kind of fumbling around with my stuff and my roommate and I were kind of talking, we were kind of wondering, what the heck’s going on? This is pretty dum that these guys are doing this,” WDAY quoted Joraanstad, a junior at NDSU. “And then they started shouting to quit moving or we could be shot. And so at that moment we kind of look at each other and we’re thinking we better take this seriously.”

If the police had acted more aggressively, the outcome could have been tragic. Joraanstad said the officers were very apologetic when they realized their mistake, and they explained what had happened.

So, watch where and how you point your telescope.

This is a rare occurrence, of course, and is nothing like risks amateur astronomers in Afghanistan regularly take to look through a telescope and share their views with local people. We wrote an article — which you can read here — about how they have to deal with more serious complications, such as making sure the area is clear of land mines, not arousing the suspicions the Taliban or the local police, and watching out for potential bombing raids by the US/UK/Afghan military alliance.

UPDATE: Maybe incidents like this aren’t quite as rare as I thought. Universe Today’s Bob King told me that just two weeks ago he was out observing in the countryside, when a very similar event happened to him. “A truck pulled up fast, with bright lights blinding my eyes and then the sheriff walked out of the car,” Bob said. “I quickly identified myself and explained what I was up to. He thought I was burying a dead body! No kidding.”

8 thoughts on “Watch Where You Point That ‘Scope: Police Mistake Telescope for a Gun”