30 arrested at Hancock, NY base during rally against drones

The Post-Standard reports that the arrests Sunday came after a series of rallies and workshops held in Syracuse over the weekend by the Upstate Coalition to Ground the Drones and End the Wars.

A group of people lying on the base’s driveway were arrested. Charges include disorderly conduct, obstructing governmental administration and loitering. About 250 people had marched to the gates, some pounding drums and chanting.

The base is home to the 174th Attack Wing of the New York Air National Guard, which operates unmanned, armed drones. They are used for intelligence gathering and bombing ground targets. 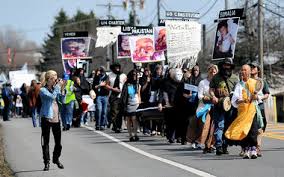 9 thoughts on “30 arrested at Hancock, NY base during rally against drones”