Furious with the government plan to impose tax on Internet data traffic, thousands of Hungarians rallied in front of the Economy Ministry in Budapest to protect the freedom of the internet from the ‘anti-democratic’ measure.

Tens of thousands gathered in front of the Economy Ministry building on Sunday, urging the politicians to scrap the plan that will see internet service providers (ISPs) pay 150 forints ($0.62) for every gigabyte of data traffic transferred over their networks.

Although the draft suggests that ISPs would be able to offset corporate income tax against the new levy, the protesters believe that eventually the new tax burden will end up pinned on common users. The Association of IT, Telecommunications and Electronics Companies has already said the tax would force them to raise prices, Reuters reports.

Hungarian citizens lift their mobile phones to protest against the goverment’s new tax plan for the introduction of the internet tax next year in Budapest downtown on October 26, 2014. (AFP Photo/Attila Kisbenedek)

The rally organized via Facebook group with over 210,000 followers said that the move “follows a wave of alarming anti-democratic measures by [Prime Minister Viktor] Orban that is pushing Hungary even further adrift from Europe.”

Protesters held up their smartphones, lighting up the square with their screens. Part of the crowd then marched to the city’s historic Heroes Square, Reuters reports. 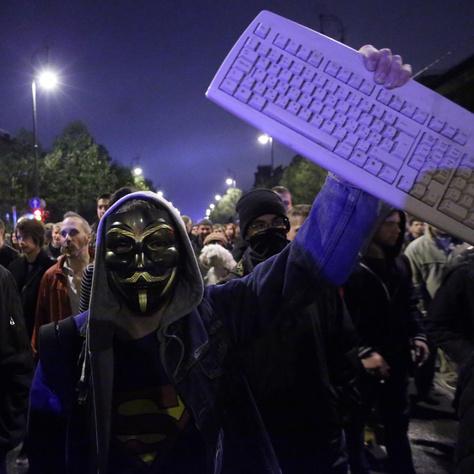 “The measure would impede equal access to the Internet, deepening the digital divide between Hungary’s lower economic groups, and limiting Internet access for cash-poor schools and universities,” the press release added, as some 41,000 people signed up to protest on social media.

The organizers of the protest dubbed “100,000 against the internet tax” promised another mass rally on Tuesday, unless the government withdraws the draft legislation within 48 hours.

Hungarian citizens lift their mobile phones to protest against the goverment’s new tax plan for the introduction of the internet tax next year in Budapest downtown on October 26, 2014. (AFP Photo/Attila Kisbenedek)

The ruling Fidesz party promised to submit an amendment to the legislation on Monday, capping the maximum tax payable by individuals at 700 forints per month. The government is trying to close in the gap in the existing tax on telecom sector – 2 forints per minute or per text message – as Hungarians use Internet-based services more frequently than traditional phones. The treasury hopes to get as much as 25 billion forints from the introduction of the internet tax, the Economy Ministry said, according to Bloomberg.

One thought on “Hungarians revolt against internet tax”