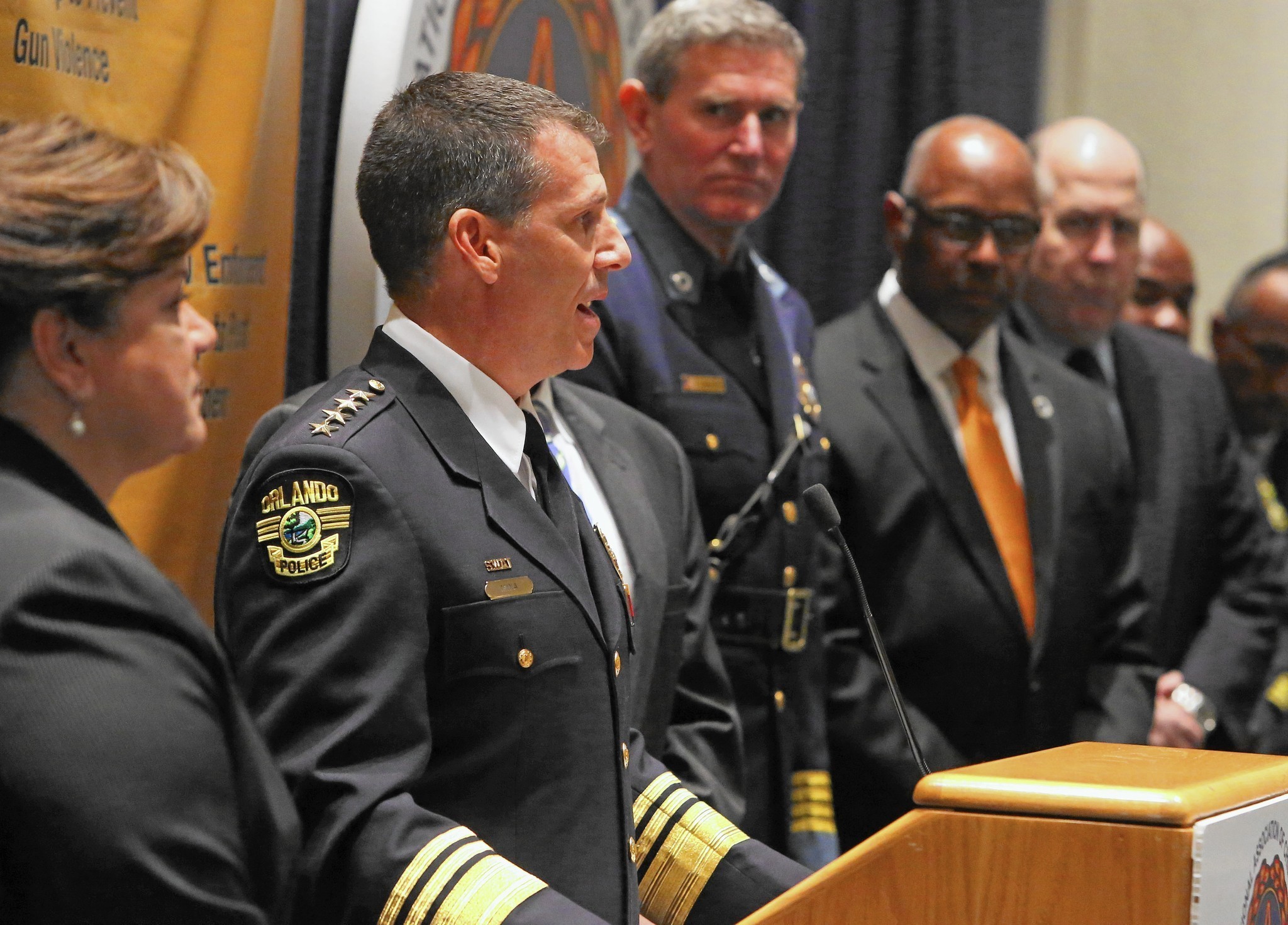 Law enforcement officials from across the country on Monday called for background checks on all gun purchases, including private and gun-show sales.

“We must close off all avenues for dangerous people to acquire firearms,” Orlando Police Chief John Mina said, during a press conference for the National Law Enforcement Partnership to Prevent Gun Violence at the Orange County Convention Center.

The partnership is comprised of nine national law-enforcement groups, including the International Association of Chiefs of Police, which is holding its annual conference at the convention center on International Drive.

On Monday, Mina and other chiefs cited statistics suggesting that gun violence is a growing menace to law enforcement.

Baltimore County Police Chief Jim Johnson said that gun deaths increased nationally from 82 a day in 2002 to 91 per day in 2012.

According to the National Law Enforcement Officers Memorial Fund, gunfire has been the leading cause of death for officers killed in the line of duty in the U.S. this year. So far, 41 officers have been gunned down this year, up 64 percent from last year, according to the data.

“Unfortunately, active shooter incidents are also on the rise,” Johnson said, adding: “This is a very significant problem and certainly one that we need to address.”

The 2012 shooting sprees at a Newtown, Conn., elementary school and an Aurora, Colo., movie theater are recent examples of active shooter situations.

The National Law Enforcement Partnership to Prevent Gun Violence has previously called for expanded background checks, as well as other firearm reforms.

The Brady Handgun Violence Prevention Act, which went into effect in 1994, requires federally licensed firearm dealers to conduct background checks. However, in Florida, sales between private citizens, including some at gun shows or initiated online, do not require background checks.

Nationally, “up to 42 percent of firearm transactions are private and they do not require a background check in many states,” Johnson said.

Speakers on Monday cited recent acts of gun violence, including the mass shooting Friday at a high school in Washington state and the killings of two sheriff deputies in California the same day.

Mina was unable to name a local specific case in which a gun purchased in a private sale was involved in a violent crime recently, but said that 14 of the 16 homicides in the city this year involved firearms.

Wellesley, Mass., police Chief Terry Cunningham said that more than two million purchases have been blocked as a result of background checks since the Brady Act went into effect.

“It stands to reason that we could block millions of other dangerous purchases” by expanding checks, he said.

The press conference was not tied to any specific legislation.

A representative for the National Rifle Association, which has opposed past attempts to expand background checks, did not respond to a call or email seeking comment.

The IACP’s annual conference began Saturday and wraps up Tuesday. The event features workshops on police tactics and procedures, as well as new law-enforcement equipment and gadgets. It draws law enforcement officers and administrators from across the country.