When Alfred Baria, 61, allegedly drove past soldiers at Camp Shelby on Wednesday afternoon and “made his truck backfire,” he had what looked like a pipe bomb in the floor of his truck.

That’s after gunshots were reported two days in a row just outside of the training base on Peret Tower Road and Highway 29.

Soldiers reported to authorities on both Tuesday and Wednesday that a maroon truck had driven by and it sounded like shots had been fired at them as they manned a traffic checkpoint in place to let the public know about the training exercise going on at Camp Shelby.

Baria was pulled over on Highway 29 in a vehicle matching the description given to authorities by soldiers on both Tuesday and Wednesday after making the same gunshot-like noises while passing a group of law enforcement investigating the scene. Baria allegedly admitted to them that he was the man they were looking for after shots were believed to have been fired at soldiers in a training excercise two days in a row.

Perry County Sheriff Jimmy Dale Smith said Baria was taken to the Perry County jail. Search warrants were issued for his car and his home, and while no weapons were recovered from the car, the fake pipe bomb was found.

The ATF sent a bomb task force from Biloxi to verify whether the device was, in fact, explosive. Once the six to seven-inch piece of PVC pipe, painted olive drab green with end caps attached, was x-rayed, it was found not to be a pipe bomb.

“He more than made it, he painted it… He wanted it to look like” a pipe bomb, said ATF Resident Agent in Charge Jason Denham. “But practically or legally, it was not an explosive device that we would be able to prosecute.”

Baria was charged with four counts of disturbance of the peace of a person, and two counts of felon in possession of a firearm.

Whether Baria actually fired shots is still under investigation. No shell casings have been found in the area. Col Greg Michel said there were no confirmed shots, but that soldiers manning the traffic control points believed what they heard were gunshots.

Baria does not seem to have any ties to any terror groups, but he does have prior narcotics convictions, Smith said. He does not have any known history of mental illness.

Denham said authorities could not speculate as to whether Baria ever meant any harm to the soldiers.

Baria told authorities he was able to make his truck backfire on command. Smith said without testing the vehicle, he didn’t know if that was true or not.

”We’re looking at unseen circumstances at this time,so we have to take every precaution we can take,” Smith said.

The person of interest has been identified as Alfred Barria. He has confessed to authorities.

Alcohol, Tobacco and Firearms agent Jason Denham said agents found PVC pipe, caps and other materials but they were not an explosive or destructive device.

Officials have cleared the area where they stopped a man near Camp Shelby.

Officials removed a black parcel from the man’s pickup truck and took it inside the bomb disposal van before the pickup was loaded onto the tow truck Wednesday.

The man who was driving the pickup truck is considered a person of interest in the two reported incidents of apparent gunfire near the base Tuesday and Wednesday.

Officials had been concerned for the safety of 4,600 soldiers training in an exercise at the military base.

The unidentified man was driving was stopped about 11 a.m. and taken for questioning by the Mississippi Bureau of Investigation. Agency spokesman Warren Strain says he has not been charged.

Alcohol Tobacco and Firearms resident agent in charge James Morris has confirmed that there is an ATF bomb squad en route from the Mississippi Gulf Coast to process the truck.

Riveting video of a bomb squad agent checking out the truck. pic.twitter.com/GCjmRO6y2n

Video from two television stations at the scene where Mississippi authorities took into custody a man for questioning over two shootings near a military facility show a small maroon pickup truck pulled off the side of the road.

In Wednesday’s video, the driver gets out with his hands raised and backs out toward two armed law enforcement officers. The man lowers himself to his knees, lowers his arms and clasps his hands behind his back. The video ends at that point.

Photos from the scene show officers going through the truck.

The man has not been identified. But Mississippi Bureau of Investigation officers have taken into custody a “person of interest” for questions. Officials have said the description of the shooter was the same in both the Tuesday and Wednesday incidents: a white male in a red pickup truck.

No one was injured in the shootings near the Camp Shelby Joint Forces Training Center.

Mississippi Bureau of Investigation officers have taken into custody a man they say is a “person of interest” in two shooting incidents near the Camp Shelby training facility in southern Mississippi.

MBI spokesman Warren Strain says authorities have taken the man into custody for questioning after the second shooting incident Wednesday.

Strain declined to identify the man or say where he had been taken for questioning.

Officials say that about 8 a.m. Wednesday, soldiers training at the Camp Shelby Joint Forces Training Center reported shots fired into the air. Lt. Col. Christian Patterson says it was in the same area where soldiers reported gunshots fired from a pickup truck a day earlier.

Patterson says the description of the shooter was the same in both instances: a white male in a red pickup truck.

A truck driven by a person of interest sits with its door open as officials process the scene. (Photo: Therese Apel/The Clarion-Ledger)

The Mississippi Bureau of Investigation has confirmed that they have taken a person of interest into custody, who is described as a white male.

A suspect has been detained, according to a social media post from a WDAM reporter.

The Associated Press contributed to this report.

Camp Shelby is in a heightened state of alert after authorities said a man matching the same description of yesterday’s shooter fired shots near Camp Shelby again this morning.

Around 8 a.m., soldiers training at the Camp Shelby Joint Forces Training Center reported shots fired in the vicinity of Peret Tower Road and Highway 29 in Perry County. It is not on the premises of Camp Shelby.

Lt. Col. Christian Patterson said this morning that the alleged shooter is a white male in a red or maroon pickup truck, make and model unknown.

“We’re making sure soldiers are aware of what’s going on so they can take the proper precautionary measures,” Patterson said.

The base is in the middle of the Exportable Combat Training Capability exercise, which involves the 155th Armored Brigade combat team and other National Guard and Army Reserve units. Over 4,600 soldiers are involved in the training, he said.

“I am in close contact with the Commissioner of the Department of Public Safety, and all available personnel and assets will be utilized to locate the suspect and affect an arrest. The Soldiers at Camp Shelby and across the state can and should take appropriate steps to defend themselves as necessary. This is one of the reasons I recently signed an executive order directing certain National Guard personnel to be armed.” 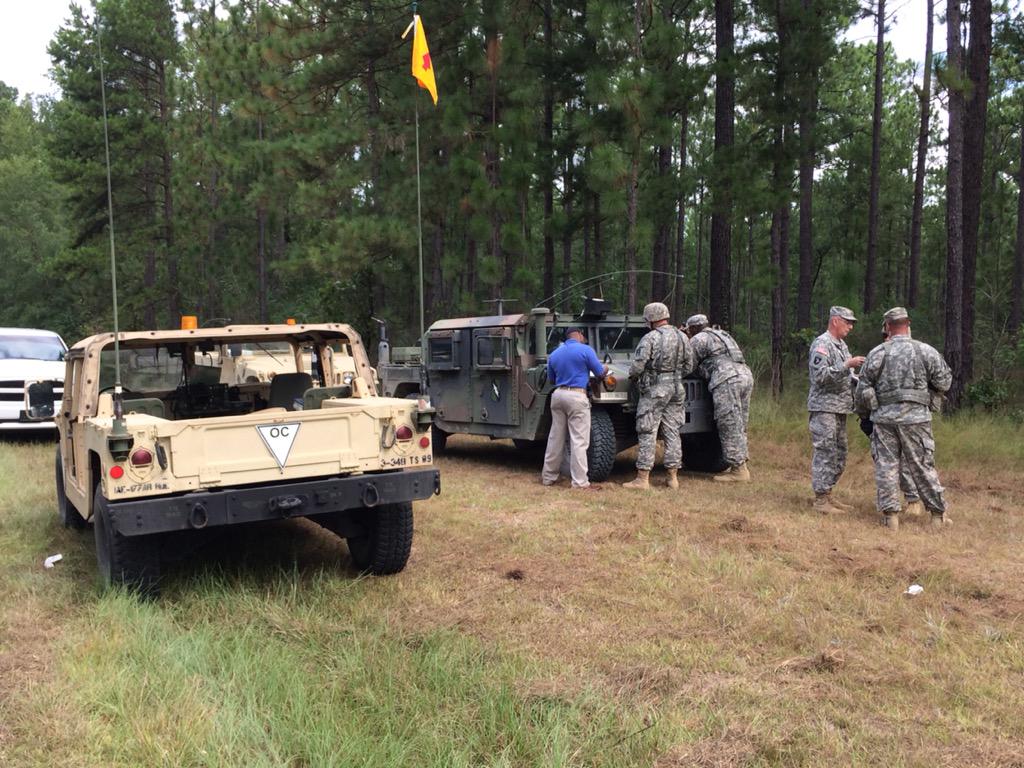 Perry County Sheriff Jimmy Dale Smith said no one was injured Tuesday when the shots were fired in the direction of two soldiers training on Peret Tower Road.

Perry County Sheriff’s Department officials are on the scene where a vehicle matching the description of the one used in a shooting incident outside Camp Shelby Tuesday. (Photo: Eli Baylis/Hattiesburg American)

The call came in around 12:15 p.m. on the sheriff’s department main line.

Smith said he doesn’t know if the two soldiers were actually the target of the shots or not, but that where they were training was visible from the road.

Officers are searching the area for a maroon pick-up truck with black rims, believed to have been driven by a white man who Perry said authorities believe fired the shots.

Initially two men were questioned after authorities released an early description of a red pickup truck and it was traced to a residence in the area. They were taken from the residence to the Perry County Sheriff’s Department by the Mississippi Highway Patrol before they were questioned and released without charges.

Smith said depending on how the investigation goes, the charges against the shooter could range from simple assault to aggravated assault. The Mississippi Bureau of Investigation has been asked to assist, and the FBI has been made aware of the incident, officials said.

After four Marines and a Sailor were killed last month in Chattanooga, Tennessee, tensions are high about attacks on U.S. military targets by foreign and domestic terrorism groups.